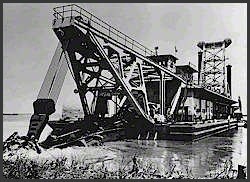 The Quebec Hydro-Electric Commission began making plans as early as 1925 to construct a new canal, which would take practically the whole flow of the St. Lawrence River, thus making available permanent power output of nearly 1,600,000 kilowatts. This canal was to be about 15 miles long, 3300 feet wide and 27 feet deep. The material to be excavated was for the most part “boulder clay” which is a heavy, sticky, type of marine clay laced with glacial boulders. The total excavation was over 250,000,000 cubic yards, larger than the quantity of materials excavated for the entire Panama Canal.

This was a completely new design and “time was of the essence”. From contract signing on March 30, 1951, until the dredge started working in mid-December 1952, the elapsed time was only 21 months, a remarkable achievement considering the large size of the dredge (over 10,000 HP), the complexities of the design, and construction in Canada.

When Prime Minister Duplessis of the Province of Quebec presided at the commissioning ceremonies, he explained the award to us as follows:

“A request for assistance in designing a new dredging unit — the “HYDRO-QUEBEC” was made by the Ellicott® Machine Corporation, world-famous for its hydraulic dredges including units for the Panama Canal and elsewhere. This company also supplied the hydraulic dredging machinery and acted as consulting engineers for the Beauharnois Company on the construction of the dredge as well as on its fitting out in Marine Industries shipyards in Sorel.”

This was the most powerful dredge in the world built up to that time; the main pump motor was 8,000 horsepower and the cutter had a maximum of 2,000 horsepower. It was an extremely difficult dredging job, but the job was completed in 1959, on schedule. A report published in Waterways Magazine of February 1953 stated that “in spite of its high initial cost, this dredge has reduced the cost of excavation of the boulder clay by a few million dollars.”

Largest and most powerful cutter suction dredge of its type ever built at that time.

Building a technological break-through dredge despite difficulties of simultaneously working in a foreign yard.