The Dead Sea is located at the southern part of the Jordan Valley. The Dead Sea and its surrounding shores are the lowest place on earth – 400 meters below sea level.  The name “Dead” was given to this body of water due to its high concentration of minerals and low level of oxygen. This combination prevents any form of organic life from existing in this region. 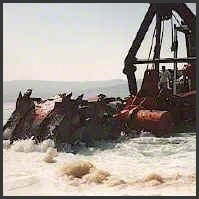 The Jordanian operation is conducted by Arab Potash Company (APC), which is owned by a consortium of Middle East governments, principally Jordan. DSW’s annual production of potash is about 2.2 mm tons.

The production process of the minerals (mainly potash, which is used for agricultural fertilizer), is based on precipitation of the minerals on the bottom of man-made evaporation ponds, dredging the minerals by large, auger-style dredges and processing it into fine material. An essential part of the process is minimizing the precipitation of table salt (NaCl) in the last of the evaporation ponds. Therefore, the first phase of processing is pumping the water from the sea into an artificial 80 sq. km pond. In this pond, the brine, with a minimal content of NaCl is pumped into the final production ponds.

In the mid-’80s a natural phenomenon was observed in the artificial pond. The NaCl started to crystallize in the form of “mushrooms” in various parts of the pond. Columns of salt started to grow from the shallow bottom. Once they reached the surface, they started to grow at an accelerated speed at the sides, which created a form that resembled mushrooms. These mushrooms limited the surface area and the evaporation capability of the pond. The DSW people started searching for a solution to this problem on two levels: on the scientific level for the reason for the phenomenon, and technically how to remove the mushrooms. 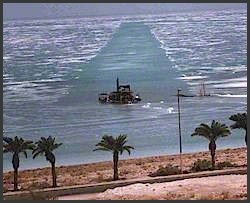 During this period a team of Oceana Marine Ltd. personnel were in the DSW plant constructing and installing a sophisticated control and navigation system for the DSW potash harvesters. Observing the mushroom problem, Oceana management decided to investigate the potential for efficient, mechanical tools that would be able to remove the hard salt formations.

After conducting a preliminary survey, Oceana invited dredge manufacturers to examine the problem and offer possible solutions. Ellicott® International of Baltimore, Maryland investigated the site and was asked to provide a “performance guarantee.”

Oceana management decided that the Ellicott® brand equipment was the most suitable for the project. The reasons for this were:

Oceana selected (with DSW approval) an Ellicott® brand B890 bucketwheel dredge, modified with special radiators and other equipment for the project. The dredge has a 100 HP dual wheel excavator, spud carriage, and CAT engines.

The pilot project contract was signed between DSW and Elliana (a joint-venture company formed between Ellicott® and Oceana.) The project scope was to dredge six channels for a total length of 23km, 50m wide, through the concentrated mushroom areas (30-40 percent surface coverage.) The pilot project results proved the capability of the dredge to execute the project. During this project, Elliana invested a great deal of time in planning.

The salt formations were extremely hard, having up to 3,000 psi and an average of 1,500 psi. Elliana proceeded with improvements to future dredge designs. During 1990, DSW started taking bids from dredging companies around the world for the clearing of a surface area of 30 km2. Two Israeli companies were awarded three-year contracts. Oceana started work in 1991. It was at this stage that Ellicott® International of Baltimore, Maryland decided to withdraw from the joint venture in order to prevent competition with potential customers.

Oceana bought two Ellicott® brand B890 dredges from the Marcopper Mining Corporation in the Philippines. Oceana rebuilt and modified the dredges to suit the project’s needs. Improvements included enlarging the hulls to enable a wider swing on the same anchor position.

Ellicott® International provided two new dual wheels for the ten-year-old vessels, which were originally built with a single-wheel design, and rebuilt pumps and engines.

Oceana’s production rate with the bucketwheel dredges was 35 percent greater than other dredges operating on the project. The project is still ongoing with the Ellicott® brand dredges.