Source: by March A. Torre – CE News for The Business Of Civil Engineering

Large tubes filled with dredged material have been used in a variety of coastal and inland projects. The tubes, manufactured of high strength polyester or polypropylene geotextile, are hydraulically filled with a dredge, such as an Ellicott® brand Series 370 or larger Ellicott® brand”Dragon®” cutter dredge. The geotextile tubes are typically filled with on-site material; however, alternate materials can be imported and used. Typical applications would include: sand dune restoration, dike construction, groin construction, artificial reefs, and simple waste containment. The tubes are filled in-place and installation is relatively simple and inexpensive.

Filling geotextile tubes with dredged material has been practiced for many years; however, the technology is still considered to be in its infancy. The following brief history is taken in part from “Geotextile Tubes-Case Histories and Lessons Learned” by Sprague, Bradley, Toups, and Trainer.

In the late 1970s, a hydraulically sand-filled geotextile tube using an impermeable fabric was developed. The system, sold under the trade name “Longard Tube,” was used in several experimental installations.

Using dredged material to fill geotextile tubes was first tried in Brazil and France in the early 1980s. In Brazil, continuously filled containment dikes were constructed from the tubes for land reclamation. The technique was used to isolate and contain run-off from a contaminated area in France.

Sprague indicated that in 1989 ACZ Marine Contractors BV in the Netherlands applied dredged material-filled geotextile tubes to the construction of underwater bottom groins for river training. Using a cradle-shape bucket on a barge-mounted crane, the groins were constructed by positioning and stacking pre-filled tubes. Eleven groins were developed, employing more than 500 tubes.

Direct filling of geotextile tubes in-place using a suction dredge delivery line was successful in 1988 in the North Sea, off Germany’s coast. The tube continues to provide containment of the fill on the landward side and protection against currents and waves on the seaward side.

Instigated by the U.S. Army Corps of Engineers, a renewed interest in geotextile tubes began to surface in the early 1990s when the U.S. government began to increasingly employ this innovative technology. Many successful trials used geotextile tubes filled with sand as groins and filled with silty, organic clays for containment dike expansion. These experiments were sufficient to convince more coastal engineers to research the possibility of using geotextile tubes. 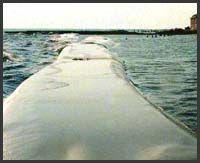 As the geotextile tube technology has drawn more attention, the need to create an industry standard to establish credibility and draw further attention was realized. During 1999, members of geotextile tube manufacturing firms joined together with the Geosynthetic Research Institute (GRI) to develop an industry standard for geotextile tube manufacturing and installation procedures. The new GRI document is titled “Test Methods, Properties, and Frequencies for High Strength Geotextile Tubes used as Coastal and Riverine Structures.” The document is a standard specification for geotextiles used in the manufacture of tubes, as well as the technical values of the geotextiles. Also, fabrication and installation methods of the tubes and the qualifications required by the installing contractor are specified. Although this document is a good guideline for specifying geotextile tubes, it is not a design aid.

As pointed out by Sprague, Goodrum, and Bradley, authors of “Dredged Material-Filled Geotextile Tubes: Design and Construction,” the concepts to design large, dredged material filled geotextile tubes and containers are not well documented. Additionally, geotextile property requirements are not well understood and few details have been reported on the operation of dredging equipment or the performance of various types of dredged materials. Still, installations based upon “reasoned” design techniques have proven to be quite successful. Therefore, these techniques are a starting point to develop more thoroughly researched design approaches.

Fill retention and the structural integrity of a dredged material-filled geotextile tube is provided by the geotextile envelope. Fabric selection is based on both opening characteristics, which should match the fill particle size and permeability, and strength, which should be sufficient to resist filling pressures. A composite fabric shell that incorporates both a nonwoven and a woven fabric for filtration and strength, respectively, is sometimes used.

Dredged material-filled geotextile tubes can be filled with any material capable of being transported hydraulically. Clayey and silty dredged materials have been used for containment dike applications, but naturally occurring beach or river sand is the best choice. The designer should assess the fill material’s settling characteristics to help determine the appropriate spacing and frequency of injection and relief ports in the geotextile tube.

A filled geotextile tube’s cross-section is circular on the edges and flattened on top. Field experience demonstrates that it is possible to fill tubes 70 to 80 percent of the theoretical maximum circular diameter, though 50 to 60 percent is more commonly accomplished.

To achieve stability under severe hydraulic conditions like drag, lift, and inertia, achieving a relatively high unit weight for a filled unit is essential. Current and wave forces must be estimated to assess the stability of the filled geotextile tube. Sprague noted that although a definitive analysis technique has not been established, it has been suggested that a modified Miniken approach as outlined in the U.S. Army Corps of Engineers; “Shoreline Protection Manual” may provide a reasonable approach to assessing the stability of filled units under wave loading. Model tests show that the percent of the geotextile tube that is filled with dredged material is an important parameter relating to stability. Another important design consideration is the internal stability of a “stacked” tube structure.

Due to current and wave action, a structure built up by one or more tubes can incite a scour hole directly adjacent to it, possibly resulting in geotechnical instability. Therefore, designs must include a filter fabric apron for scour protection. A filter fabric apron, also known as a scour apron, usually consists of a small tube, called an anchor tube, fabricated into the seaward edge of the apron or around the entire perimeter. The anchor tube is filled with dredged material to stabilize the scour apron. It must have filtration characteristics that are appropriate for the foundation soil and the anchor tube’s fill soil. The scour apron should extend a sufficient distance in front of and behind the geotextile tube structure to prevent scour of the foundation.

Most geotextile tubes will contain several injection ports throughout the length of the tube. The ports are usually located at the top centerline at a spacing of no more than 50 feet (15 m). These ports are employed for filling and also for the relief of excess water. A determination of the port spacing must be made by the contractor and/or the engineer prior to the fabrication of the geotextile tube. Several factors will influence the appropriate spacing, such as the overall size of the geotextile tube, size of the dredge pip, discharge volume of the dredge, type of fill material, and amount of water to be used as a vehicle for transporting the solids.

Depending upon the spacing of the injection ports, the composition of the dredged material, and the capabilities of the dredge, some of the injection ports will not be used at all. For example, a 200-foot (61 m)long geotextile tube may contain five injection ports. If the conditions are ideal and the dredge is capable, it is likely that the entire 200-foot (61 m) long geotextile tube could be filled from one injection port located near one end of the tube. The injection port located the farthest away would be left open to allow the expulsion of excess water, acting as a relief port. All of the ports in between would be tied off and left unused. If conditions are not ideal for filling from one port, then the correct intervals in which to move the dredge pipe to continue filling the tube must be determined. Filling operations are performed sequentially by using one port for injection and one (or more) port(s) for relief. As the operation progresses, all ports in completed segments of the tube should be closed to prevent loss of materials from within the tube.

Prior to filling with any solid material, the tubes are filled to their desired height with water only. Once the desired height has been achieved, the dredge operator can introduce solids into the geotextile tube. By first filling the tube with water, the solid material is allowed to be distributed within the tube more evenly. Newly introduced solids and vehicle water will simply push out the existing water.

Most projects contain multiple geotextile tubes that must be filled in a predetermined sequence. Each tube is usually filled completely prior to the installation of subsequent geotextile tubes. Subsequent tubes can then be placed against the existing tube and filled. This method of installation will create a low area between the tubes due to their rounded ends. If low spots are not desired, alternate connection methods can be employed. The most common installation practice to eliminate, or at least minimize, the amount of depression is by the use of an overlap. With this type of a connection, each subsequent geotextile tube (and usually the scour apron) must be placed underneath the tail end of the previously deployed tube. The “underlapped” tube is not fully deployed at this time. Obviously, this overlapping procedure must be accomplished prior to filling either geotextile tube with water or solids. Once the connection has been made, the “first” geotextile tube is filled as previously described. Each subsequent tube is also filled in the same manner, however, the section of the tube that has been placed underneath will not be filled and a fairly tight (and “full-height”) connection should result.

Upon completion of the installation, the injection ports must be secured properly to assure that they do not become torn during wave events. The correct procedure for securing the injection ports will be provided by the geotextile tube manufacturer. However, a commonly practiced method is to simply cut-off the injection port, while allowing enough excess fabric to roll (or fold down) flush to the top surface of the tube. The folded material is then fastened to the tube surface by the use of corrosion-resistant lock rings or compression type fittings.

Filled and closed geotextile tubes will continue to dewater and the solids will further consolidate for some time. The duration of the dewatering and consolidation period will vary depending upon the type of geotextile and fill material. Typically, coarse material will dewater much faster than fine material such as silty clay. Once the expected amount of dewatering has taken place, the geotextile tubes can be buried, backfilled, etc.

Although dredge-filled geotextile tube technology has been used for many years, recent high profile projects have brought attention to the industry. By collaborating with the GRI to document an industry-standard specification, the methodology has gained further credibility. The technology and the industry are still young, but newer and better protocols are being realized on a daily basis. The future certainly looks bright for dredge-filled geotextile tubes.

(Geotube® is a registered trademark of Ten Cate Nicolon)

Excerpted from CE News for The Business Of Civil Engineering