Ellicott® International, a leading dredge manufacturer of environmental dredges, announces a new type of dredge which actually walks by itself. The dredge moves on three moving spuds or traveling carriages enabling it to remain in the exact position at all times because there are always two spuds firmly anchored in the bottom. It walks with the spuds while floating on the surface. This positioning allows the cutter to move forward into the next cut without losing position. This same technology also enables the dredge to move backwards to pick up contaminated material which dredging may have missed yet still remains in the same exact position to continue the forward dredging.

The new dredge lends itself to precise dredging and positioning especially in rivers where there are currents. Where standard dredges are at risk of losing their positioning due to currents, this one is not. There are also no cables to operate the dredge and so no cables to engage contaminated sediments causing undesirable turbidity. Even the stern spud has a power-down feature which enables a firm grip into the bottom.

The Ellicott® brand dredge is equipped with a special underwater relief valve which prevents line plugging and allows for an exact amount of contaminated material to be pumped consistently, irrespective of the bottom sediment condition. In many cases, especially in river environments, contaminants are present not only in the sediments but also through migration in the sandy or clay original bottoms. The dredge’s cutter has sufficient power to remove these contaminates in thin layers. The unit can remove sediments to a depth of 22 feet (7 m) below the water surface.

The unit has controls which tell the dredge operator exactly which layers the cutter is in. The cutter can dredge to tolerances of plus or minus one inch (25 mm) which is critical, especially for contaminated sediments. The operator controls keep re-suspension of the sediment back into the water column to an absolute minimum. All dredge functions are linked to global positioning systems.

This environmental swinging ladder dredge is the first major improvement using this type of technology in many years.  These Ellicott® Brand Swinging Ladder dredges can be used in lakes and narrow canals such as the thousands of miles of canals in Florida which will need dredging. Ellicott® International has one unit now operating in a mid-west USA location.

Both functions of the ladder – swinging and raising/lowering – are controlled by hydraulic rams. Because the ram which raises and lowers the ladder can apply a downward force on the cutter, it ensures that the cutter is in full contact with the contaminated sediment at all times and not bouncing over, which would cause undesirable turbidity. 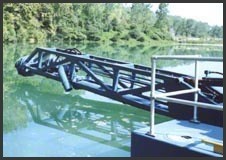 The dredge is available in discharge flows of 1,500 to 6,000 gallons/minute (5,700 to 22,700 liters/minute). It is very compatible with contaminated sediment treatment systems because of the accurate percentage of slurry in the pipeline system on a consistent basis.

The dredge is so mobile that it can make right and left turns, back up, and even parallel park itself much like parking a car. The dredge can be either diesel or electric powered.