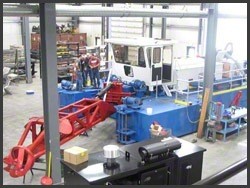 The oceanfront community of Point Lookout has been battered by recent nor’easter storms, losing up to 250,000 cubic yards of sand along the shoreline. Hempstead Town Supervisor Kate Murray and State Senator Dean Skelos joined together at a Freeport press conference to dredge up a plan to combat coastal erosion. Also at the press conference to unveil the town’s newly delivered marine dredge, which was acquired through a Senator Dean Skelos/Assemblyman Harvey Weisenberg state grant, were Councilwoman Angie Cullin, Town Clerk Mark Bonilla, Receiver of Taxes Don Clavin and local civic and community leaders. The dredge will take sand from areas of accumulation and pump the material onto decimated local beaches.

“This new dredge is vital to combating coastal erosion and protecting local homes, businesses and residents,” said Murray. “I want to thank Senator Dean Skelos for securing the funding for this important piece of equipment.”

Hempstead Town has taken delivery of the dredge, which will be assembled like an erector set over the next few months in preparation for an early spring launch. In fact, Murray and Cullin helped fasten some of the first bolts as part of the boat’s assembly.

Hempstead Town is one of the only area municipalities to own a mid-size dredge for the restoration of beaches. The dredge, a workboat and 8,000 feet of piping to move and pump the sand were purchased for $1.14 million. New York State Senator Dean Skelos secured $1.1 million for the dredge purchase and the town contributed an additional $41,000.

“Hempstead Town’s marine dredge will be a great asset to the Point Lookout community,” said Senator Skelos. “With the proper equipment to restore sand on our beaches and reinforce sand dunes, we will be able to better protect residents, homes, and businesses from the threats of storms and coastal erosion.”

Since the Point Lookout beaches were last dredged in March 2008, between 50 and 75 feet of shoreline has been lost to erosion. Instead of having to rely on the U.S. Army Corps of Engineers to replenish the beaches, the town will be now able to address the shoreline’s problems more quickly and comprehensively.

“This is a great benefit to the Point Lookout community,” Councilwoman Cullin said. “Area homes and businesses will be better protected from the threat of storms and the dangers of flooding by the dredging and sand restoration we will now be able to do directly.”

Prior to the March 2008 Army Corps of Engineers project that dredged the clogged Jones Inlet and placed the dredged sand on local beaches, tidal ocean water had breached dunes and flowed into residential streets in Point Lookout. The dredge will allow the town to address critical needs, including reinforcing the dunes to prevent a breach. Sand dunes are the last line of defense between the ocean and area homes, buildings and roadways, and stabilizing the dunes is critical to safeguarding the lives and property of the oceanfront community. Additionally, the dredge will complement the town’s efforts in support of a modified Long Beach Storm Reduction Project to protect the Long Beach Island communities from high storm surges and waves by constructing new groins and reinforcing existing ones.

The town anticipates moving sand from the northeast side of Point Lookout to the east and southeast portion of the oceanfront community among other areas. The dredge is expected to be operational by the spring 2010 season.

“Sometimes dredging-up ‘old stuff’ can be a good thing, and the sand that we will be removing from local channels for the replenishment of storm-ravaged beachfront is a very good thing for oceanfront residents and business owners,” concluded Murray. “I want to thank Senator Dean Skelos and Assemblyman Harvey Weisenberg for securing the funds for this dredge and local residents who have been our partners in fighting coastal erosion.”