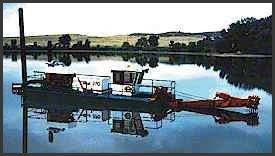 In April 1984, the SAS Trapnell, an Ellicott® Brand Series 370 dredge, was launched in Noxontown Pond near Middletown. Now in its thirteenth year of service, this dredge has provided means to restore and provide maintenance to ponds and other bodies of water in both New Castle and Kent counties.

The past year was a very busy one for the SAS Trapnell and its crew. The project at Moores Lake was completed after more than 75,000 cubic yards of sediment were dredged from the lake. Dredging was performed in a manner sensitive to the needs of the lake’s aquatic life. The Trapnell was then moved to Augustine Beach, where it was assigned to dredge material around the boat ramp and discharge it on the beach south of the breakwater in a 60,000 square-foot area.

Upon completion of the Augustine Beach project, the Trapnell was again moved, this time to Delaware City to dredge the city’s mooring basin and the mouth of the channel that meets the canal. Dredging was performed to increase the depth of the basin. To restore the depth, the dredge made an 8-foot cut, one of the largest the Trapnell has ever made.

Dredge Overhaul
The normal wear and tear on the dredge was exacerbated during the past year due to the higher-than-average quantity of abrasive sediment that was pumped through the dredge and pipes. Normally after each project, the dredge is pulled out of the water and maintenance is performed. However, even with the heavy workload this year, the dredge was only down for a two-week period when needed repairs were made. Besides the necessary repairs on the dredge, several pieces of equipment were purchased along with an order for a new 16-foot workboat. These new acquisitions will further enhance the dredge operation.

Future Projects
The next proposed project is the dredging of Garrisons Lake. Several other projects that have been identified for future dredging are Becks Pond, Little Mill Creek, and St. Andrews (Noxontown Pond.) Long-term possibilities are Churchman’s Marsh, Lums Pond, and Lums Pond Marina.