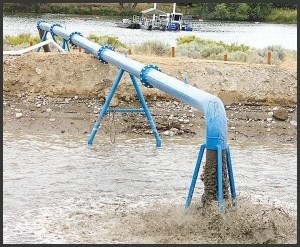 MOSES LAKE – About 50 Moses Lake residents and dignitaries walked up a steep incline to see sediment pumped from the lake’s bottom into a holding pond.

A large pipe stretched from the lake to a pond, dumping water.

The water’s color changed from clear to dark, some onlookers started taking photos to document how the technology works.

The Moses Lake Irrigation and Rehabilitation District invited the public to the demonstration Monday to learn more about the project.

Mary Conrow, of Moses Lake, was one of the onlookers. She attended the event because her husband was “really interested” in the dredging process and had questions.

Another resident, Ed Buchmann, 93, said he was a Neppel farm pioneer and was interested in seeing the process.

Before the demonstration, Rep. Bill Hinkle, R-Cle Elum, called the dredging “a community project,” with a lot of discussion, efforts and even some state money to make it happen.

The project “really is your baby and the future of Moses Lake,” Hinkle said. 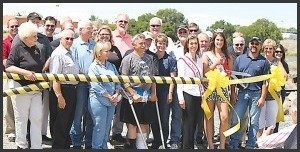 Rep. Judy Warnick, R-Moses Lake, said the management of Moses Lake isn’t new, as it has been going on since 1928.

What’s new are the regulations, invasive species and lots of new recreational uses, she pointed out.

“I think you all have done a great job of coming through this point,” Warnick said in part. “Moses Lake truly makes this the desert oasis.”

Moses Lake Mayor Jon Lane called the lake one of the jewels in the town’s crown.

The dredging project will bring the lake back to what it should be, he said.

Lane congratulated everyone involved with the project.

Miss Moses Lake Audrey Ramsden called the project an exciting one for the community and said it was a great honor to be at the event.

Ron Covey, president of the irrigation district’s board of directors, thanked Moses Lake businessman Pamp Maiers for allowing the district the use of his property for the sedimentation ponds, past board members Richard Teals and Glen Rathbone and current director Norm Benson and Rich Archer, and ratepayers. 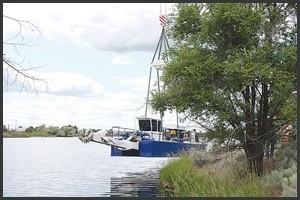 During the question and answer period, Columbia Basin Herald Publisher Harlan Beagley asked if the appearance of the sediment sand bar near the lake crossing would change this winter.

Biologist Ryan Walker, of Grette Associates Environmental Associates, said there would be a change, depending on the dredge’s production.

There will not be sediment built up on the bar at its current rate, Walker said.

Warnick asked about the dredge’s impact to the fish and if they could escape the pull of the vacuum.

It was also asked how deep the dredging was being done.

Walker said between 8 feet and 20 feet.

At the end of the event, Vision 2020 Chair Bill Ecret presented Curt Carpenter, the Moses Lake Irrigation and Rehabilitation District’s manager, with the July Visionary Award for the project.