The city and a dredging firm have completed the first phase of a master plan to dredging management throughout the city’s canal system.

Michael Ilczyszyn, city business manager, and Jack Adams of Gator Dredging made a presentation to City Council during its workshop Monday at City Hall to its plan to dredge the Southeast quadrant.

The entire presentation, all 179 pages, can be seen online. Adams and Ilczyszyn gave the council the highlights. 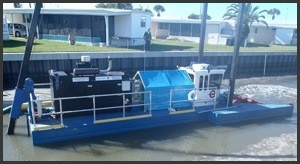 The southeast quadrant, with 349 named canals on 115 miles, is located south of Hancock Bridge Parkway and east of Santa Barbara Boulevard and will be dredged, starting as early as April, over a period of three years.

The southeast quadrant, which hasn’t been dredged in nearly 20 years, should be completed with current funding, and with permitted dredging methods, Ilczyszyn said.

In all, 42,868 cubic yards of sediment is expected to be dredged from the bottom of the canals in order to re-establish permitted depths.

The sediment sampling and analysis were done at five locations throughout the quadrant.

The southeast canals were all sounded and 53 canals extending 19 miles or more in length required a detailed hydrographic survey.

Councilmember Chris Chulakes-Leetz had some concerns about the master plan, such as how the dredging was going to be funded and how long it would take before it had to be dredged again.

Ilczyszyn said it would come from the usual $1million to $1.2 million to city pays for dredging annually and that it would take 15-20 years before the quadrant would have to be dredged again, assuming nothing unforeseen occurs.

Leetz was also concerned with the composition of the sediment at the bottom of the canals.

“It’s not silty and high quality for dredging,” Adams said. “We did no chemical analysis because without stirring it up, we wouldn’t know the chemical composition.”

Councilmember Marty McClain said he wanted a schedule of dredging and also asked if spot-dredging could be done in the middle of the canals. Adams and Ilczyszyn said that both were possible.

The purpose of dredging is to promote proper drainage, reduce flooding, provide capacity for flushing during storm and tidal events, improve the ecological environment and provide safe waterbodies.