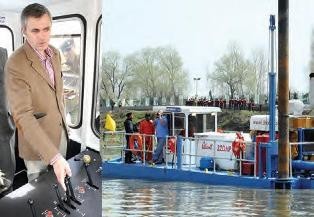 Baramulla, Mar 24: Highlighting the necessity of preparedness to tackle eventualities and calamities, Chief Minister Omar Abdullah Saturday said that floods have always been cause of threat to the life and property in the State. He said that the phenomenon of flood cycles witnessed in the State after regular intervals calls for all the more focused attention for required measures.

“We should be amply prepared and alert to the threats of heavy floods so that we are not caught unaware at the time of emergency”, he added while addressing a function after inaugurating Rs 21.38 crore Dredging Scheme at Jati, Duabgah and Ningli in Baramulla district today.

Omar Abdullah said that the government is working on a comprehensive flood protection project to increase the intake capacity of major rivers, strengthen the bunds, revive flood channels and introduce long term and short term measures adding that the dredging operation in river Jehlum is the part of this strategy.

“While we feel satisfied by constructing bridges, roads, schools, colleges, water supply installations and similar other development schemes as these facilities are in positive use of public but when we create flood protection like facilities we pray to the God that we may not be compelled to put these measures in use”, he said laying stress on preparedness and alertness of the administration and the people to face the challenges of nature.

The Chief Minister said that the importance of dredging of river Jehlum can be visualized by the fact that the first Dredger was inaugurated by the Prime Minister of India at Baramulla some 60 years back.

It was during the stewardship of Sheikh Muhammad Abdullah that the first Dredger was inaugurated by the then Prime Minister of India Jawahar Lal Nehru and dredging operation continued from 1959 to 1986. The scheme has now been revived by the Chief Minister again today in presence of Minister for PHE, Irrigation and Flood Control, Taj Mohi-ud-Din and Minister of State for R&B, Javid Ahmad Dar.

Omar Abdullah said that the coalition government from the day one it took office has concentrated attention on all round development of the State and preparedness to face calamities and threats has been flagged one of the important concerns. He praised Taj Mohi-ud-Din for infusing new energy in the PHE, Irrigation and Flood Control Departments adding that the Minister has not only revived old and defunct schemes but launched new ones in this sector.

“Availability of funds would be no constraint in this regard”, he said adding that the government was keen to upgrade the development process in the town. Expressing dissatisfaction over the abandoning of Jati Bridge despite expenditure of about Rs. 2 crores on it, the Chief Minister said that he has asked the concerned department to prepare a project for the completion of the bridge.

Speaking on the occasion, Minister for PHE, Irrigation and Flood Control, Taj Mohi-ud-Din explained the salient features of the Dredging Scheme and its benefits to tackle flood threats.

The Minister lauded the UPA Government for providing funds for the scheme and praised the Chief Minister’s pro-active role in getting the funds from the Centre. He also gave details of other flood protection measures presently in the pipeline and already launched in the State.

“This would increase the carrying capacity of the outfall channel from Ningli to Gantamulla to 35000 cusecs against the existing capacity of 28000 cusecs. The sediments in the shape of sand and concrete will generate substantial revenue to the department,” he added.

The Chief Minister also planted a Chinar sapling at Duabgah.