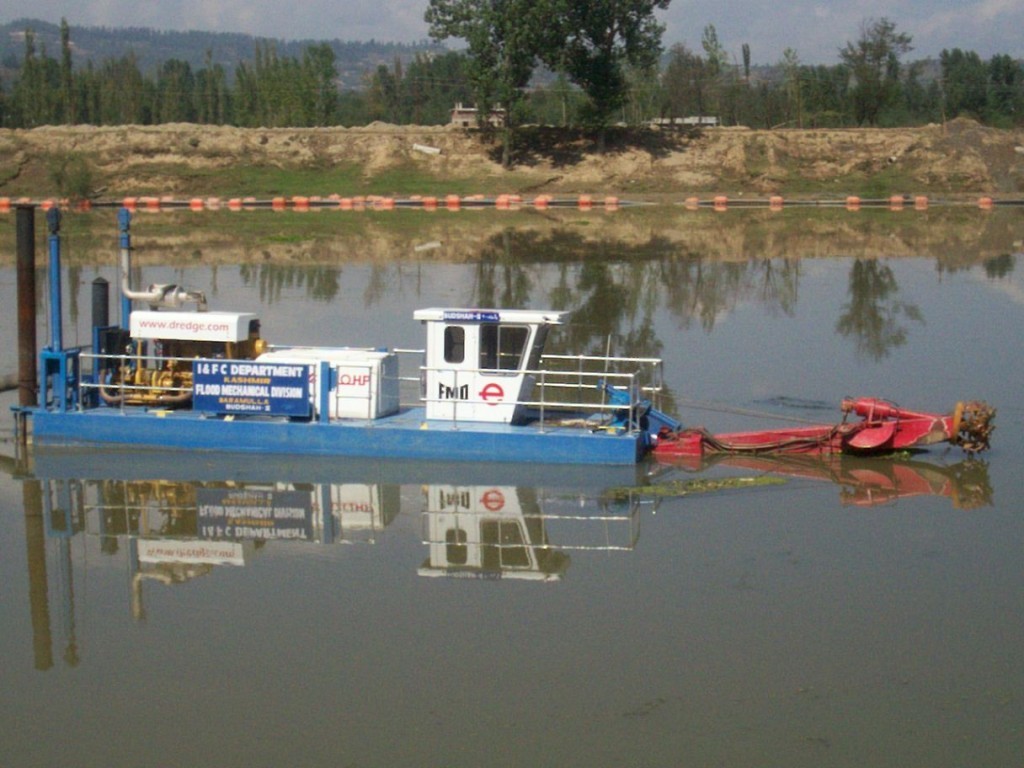 An ambitious project to salvage Kashmir’s lifeline river Jhelum has started to yield positive results with the Jammu and Kashmir government maintaining that the flood threat triggered by recent incessant rains subsided due to ongoing conservation measures in the river in north Kashmir.

Jhelum which is a main source of irrigation in the Valley has been marred by extensive siltation in last few decades. In absence of any conservation measures, the river had lost its carrying capacity and led to blockage of its lone outflow channel in Baramulla, posing a risk of floods in the Valley.

After decades of inordinate delay, the Jhelum Conservation Project was launched by the Chief Minister, Omar Abdullah, from north Kashmir’s Baramulla district earlier this year. The conservation efforts received a major boost after the Government procured two state-of-the-art dredgers manufactured in the United States for undertaking dredging operation.

“The ongoing conservation works in Jhelum in Baramulla district have been successful as we could evade recent flood threat. By constant dredging we removed blockades in the river in Baramulla and considerably increased the river’s outflow capacity,” Taj Mohi-ud-Din, Minister for Irrigation and Flood Control told Greater Kashmir.

Jhelum meanders in a serpentine way from South to North Kashmir and settles in Wullar, Asia’s largest freshwater lake, before pouring into Pakistan administered Kashmir through Baramulla. Experts said the devastating flood in 1959 caused backwater effects to Jhelum due to low outflows from Wullar Lake in north Kashmir which has been nearly chocked by heavy accumulation of silt and narrow outflow channel.

“We have removed tons of silt in the outflow channel. Jhelum Conservation Project is self-sustaining as the sale of the silt fetched the Government over rupees two crores in last few months. We will use this money in long-term conservation of the river,” Taj said adding the two US made dredgers have expedited the conservation process.

The dredgers have been manufactured by US-based Ellicott Dredges—one of the oldest manufacturers of dredging equipments. Incidentally, Ellicott Dredges had supplied the first dredger for conservation of Jhelum in 1960. The dredger was commissioned by the then Prime Minister Jawahar Lal Nehru.

Procured at a cost of Rs 12 crores, the dredgers named as Soya II and Budshah II are designed to undertake deep dredging. Aijaz Rasool of KEC Mumbai representative of Ellicot Dredges in India, said the dredging operation is going on full swing in Janbazpora and Juhama in Baramulla.

“By sustained dredging at these spots we could evade the hundred year frequency of floods in the Valley. But this was not possible without the dredgers,” he added.

Officials said the then Prime Minister of Jammu and Kashmir Bakshi Ghulam Muhammad in late ’50s had approached the Government of India to seek expert advise and engineering solution to the problem. Under the guidance of Central Water Commission experts, a Master Plan for dredging works of Jhelum from Wullar to Khadanyar was formulated.

The project envisaged deepening and widening of Jhelum from Ningli to Sheeri by mechanical dredgers. However at that time, the dredgers were not manufactured or readily available in India. Officials said it was due to personal intervention of the then Prime Minister Jawahar Lal Nehru that the dredgers were purchased.

“However, the dredging operation continued only up to 1986. It was suspended due to lack of adequate resources and backup facilities. Since then tons of silt deposition has occurred in Jhelum due to rapid degradation of its catchments. This has reduced the flood routing efficacy of Jhelum’s outflow channel and its charge carrying capacity from 35000 cusecs in 1975 to 20000 cusecs at present,” officials said.

The Irrigation and Flood Control Department had in 2009 sent Rs 2000 crore project to the Ministry of Water Resources for sanction. The project included many restoration works including improvement of Jhelum’s existing dredging of outfall channels, protection and anti-erosion works and increasing hydraulic efficiency.

However, the Ministry had approved only a part of the project costing Rs 97 crores to facilitate immediate interventions including procurement of machines and dredging in Jhelum, particularly of its flood spill channels in Srinagar and outflow stream at Daubgah and Ningli in Baramulla.

Taj said all the data regarding intake and out-take water levels, flood gauge and Jhelum’s carrying capacity for the past 50 years has been digitalized.

“We have also undertaken dredging of flood spill channels in Srinagar and adjoining areas besides launched navigation from Sonwar to Old City. After completion of the dredging, we also plan to remove all the encroachments on the river banks from Islamabad to Baramulla. In few years, Jhelum will be restored to its pristine beauty,” Taj added.