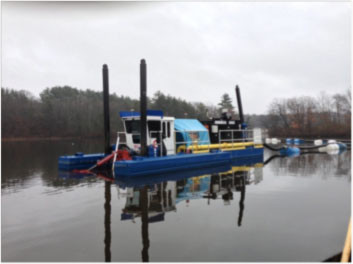 A Win-Win for Boaters and the Bays

Recycling is not just something residents of the Inland Bays can do at home.

An innovative recycling project is underway on the Inland Bays.

The CIB has partnered with the Delaware Department of Natural Resources and Environmental Control (DNREC) to recycle sediments dredged from channels to build up the tidal marshes of the Inland Bays.

In a cooperative effort to eliminate the need for new dredge spoil sites and demonstrate the potential of using this material to mitigate the effects of marsh subsidence and sea level rise, DNREC and the CIB have set their sights on a 25-acre area of tidal marsh adjacent to Vines Creek Marina.

In a process called beneficial reuse, dredge material is being used to build up tidal marshes that are losing ground, literally, as a result of sea level rise. Raising their elevations will make them more resilient to the impacts of rising tides caused by sea level rise and land subsidence.

The dredge material is coming from a DNREC dredge project to deepen the navigation channel on Pepper Creek and improve access for boat traffic. Normally the dredge material would be placed in an upland disposal facility, but this project puts the waste to work and keeps the material in the system.

Current research has shown that removing dredge material from channels and disposing of it in an area outside of the reach of the tides could result in a long-term deficit in the amount of sediment that is in the system and available to the natural process of re-building the marshes; critical to their ability to maintain elevation and keep pace with rising sea-levels.

As the dredge digs down several feet into the channel bottom, the material is drawn into an 8-inch pipe that is partially submerged in the water, then transported through the pipe to a barge located on the shoreline of the marsh several hundred feet away. The dredge material is then forced through a 4-inch high-pressure nozzle and sprayed in a long stream on to the marsh surface. The nozzle can be pivoted to direct the sediment to different locations.

As it is sprayed, the brown slurry, which is 90% water and 10% sediment, flows along the surface and deposits in the low areas of the marsh. It is expected that one to six inches of sediment will be sprayed over the marsh surface, with the lowest spots receiving the thickest application of material. 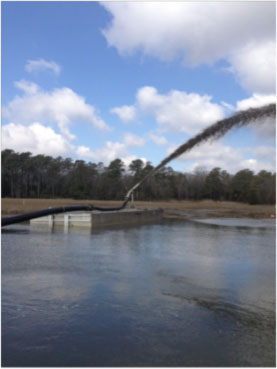 This method of spraying dredge sediments over the marsh is relatively new to Delaware, but this process of thin-layer application of dredge material has been used to restore tidal marshes in the Gulf Coast of Texas, Louisiana, and Alabama for a number of years. For DNREC, this could mark a new era in the dredging and maintenance of navigation channels of the Inland Bays. What was once a waste material that was costly to remove and dispose of is now a valuable, local resource that can be used to help restore the tidal marshes and the vital services that wetlands provide; filtering the water, buffering the land from storm surges, and providing nursery habitat to fish and crustaceans.

The thin layer application at Pepper Creek continued until March 31, when operations were halted until next winter to minimize the impacts on the fish community in the creek. Work will begin again in the fall.

This project team includes representatives from DNREC’s Shoreline and Waterway Section, Watershed Assessment Section, Wetland and Subaqueous Sections, the Division of Fish and Wildlife, and the Delaware Center for the Inland Bays working together to demonstrate the effectiveness of beneficial reuse of dredge material restoration techniques on the Inland Bays.

So next time when you see mud being sprayed on the marshes of the Inland Bays, don’t worry it’s not a leaky pipe, it is wetland restoration through recycling, hard at work re-building our marshes.

Ellicott Dredges, LLC wishes to inform our customers, vendors, and prospective buyers that we are continuing our manufacturing operations to guarantee the supply and distribution of essential critical infrastructure equipment for marine environments and global waterways.

Ellicott Dredges will continue to transport equipment throughout the United States and the world following all laws and directives set forth by government agencies.

Our offices and factory teams are fully operational, as we continue to provide a safe work environment for our employees by practicing social distancing of 6 ft. (1.83 m) between individuals and providing accessible hand sanitizer stations available to all employees.

Ellicott Dredges will receive essential client visits upon prior approval by our CEO and Human Resources Dept. All guests will be given a safety briefing prior to entering the main facility.

For questions or concerns please refer them to Vice President, Paul Quinn, at pquinn@dredge.com. Thank you for your support.