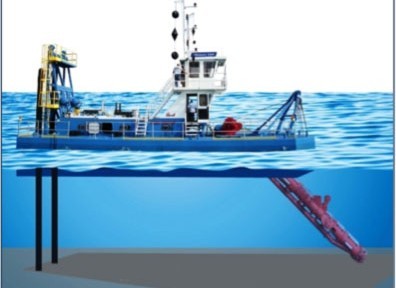 “Why do you think Baltimore was so successful as a port?” asks Burt Kummerow, president of the Maryland Historical Society. Its location along the Chesapeake Bay? Its moderate climate? “No,” says Kummerow. “It was because of the immortal mud machine.”

Ah, the immortal mud machine. Like many East Coast harbors, Baltimore’s had–and still has– major issues with silt building up. Lucky for us, we had a key advantage: the dredge was invented right here.

Flour merchants John and Andrew Ellicott, whose ships required deep ports to transport their cargo, are generally credited with being the first to employ a crude dredge to dig out the harbor, starting in 1783. (And in fact, Baltimore-based Ellicott Dredges still produces equipment today.) But it was Capt. Stephen Colver and a design he patented in 1798 that really improved the port. According to Kummerow, Colver’s dredge, basically a floating barge with a “scoop” powered by horses or men who turned a windlass, could haul up to 25 cubic feet of mud in every scoop. Colver was paid 1 cent for each cubic foot of dirt his team raised, earning the captain a fine income of more than $5,800 a year.

For his workers, it was a lousy job by any measure, “Who could endure the odors of the mud thrown out in warm weather upon the wharves?” a newspaper editor opined. During winter, Colver plied his workers with copious amounts of liquor to keep them working and warm.

By 1806, in an attempt to save money, the city bought out Colver and installed a “superintendent of the mud machine” to oversee the work. The effort saved taxpayers $3,141 a year and the harbor, via increasingly advanced “mud machines,” has kept the port navigable–and successful–ever since.