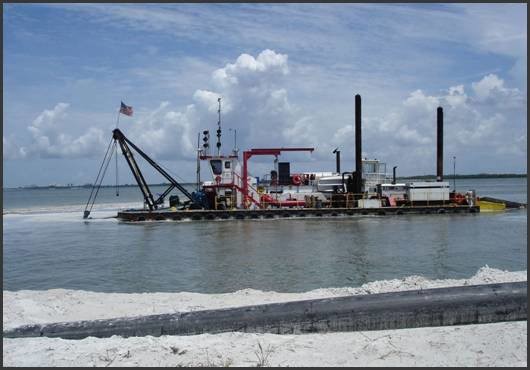 The Corps contracted the project to Southwind Construction Corporation, which came in ahead of schedule and within budget, said Andy Reid, Norfolk District’s contract office representative. Southwind used their 16″ Ellicott Series 970 cutter dredge, pictured above, to perform the work.

The maintenance dredging also featured beneficial reuse and placement of approximately 112,000 cubic yards of sand on 6,500 feet of shoreline, from the Lynnhaven Inlet to a nearby neighborhood along Chic’s Beach in Virginia Beach, VA, near the mouth of the Chesapeake Bay. “The city of Virginia Beach is extremely pleased with Norfolk District’s performance on this contract,” said Phill Roehrs, P.E., Virginia Beach’s water resources engineer. “The vital waterway serving the basin was cleared of all shoaling, and the sand removed from the channel was placed on one of our erosional shorelines to provide replenishment. It’s the best of both worlds.”

The project typically requires full-maintenance dredging cycles about every three years, providing access to the Chesapeake Bay and Atlantic Ocean for commercial fishing vessels, charter fishing boats, head boats and a wide range of private recreational vessels. The channel is used by the pilot boats for both the Virginia and Maryland pilot stations based inside the inlet to transport pilots from their dock to deep-draft ships entering the Chesapeake Bay from the Atlantic.