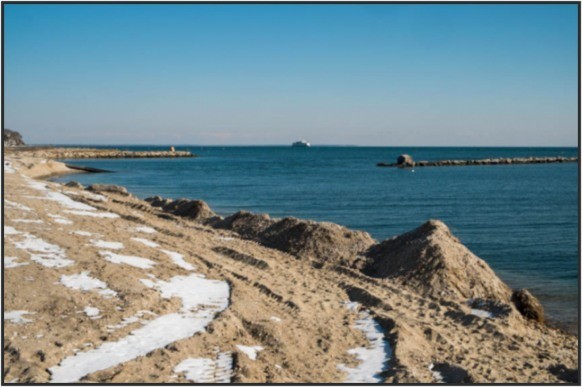 After several months of delay, two dredging projects in Tisbury are nearly complete.
Dredge committee chairman Nevin Sayre said Wednesday that work at the entrance to Lake Tashmoo and at the west entrance to Vineyard Haven harbor wrapped up earlier this month.

“We’re quite pleased with the results,” Mr. Sayre said. He said sand was placed at the public beach in Tashmoo as well as the public beaches at Grove avenue and Owen Little Way.

“Once again we have a beach,” Mr. Sayre said. “The whole area along Grove avenue is beautiful for walking now. I’ve already seen people walking and cross-country skiing there, which you physically couldn’t do before.”
The dredge projects were approved at last April’s annual town meeting, under a $500,000 borrowing article. Lake Tashmoo is typically dredged every other year. The last time the west entrance to the harbor was dredged was in 1997.

Work was scheduled to begin in late May but was postponed after the equipment owned by contractor Barnstable Dredge broke. After the summer season, Mr. Sayre said, the work was then pushed back “as late as possible so it has the most benefit for next summer.”

Work at Tashmoo began in December. The harbor dredging followed on its heels and took about three weeks.
Mr. Sayre said he had not yet received a bill from Barnstable Dredge and did not know how much total sand had been removed. He said he expected the projects to be on budget, and that the town had saved on setup costs by doing the Tashmoo and harbor dredging back-to-back.

“There’s no indication there’ll be any surprises,” Mr. Sayre said