The largest of its current projects involves East Port-Said Axial Port. The design and construction of a new port to the east of Port Said By-pass will meet the expected demand for marine transportation. Phase one of the project will include the construction of the access channel, a turning basin, a berthing basin, a short cut channel, and widening of Port Said By-Pass. Bids were received in late 1998 and an award is expected by the end of the year.

Port-Said Axial Port
The planned dredging amounts to over 100M m3. The zone is about 20 km2. That is why East Port is very important to assist in exports as a great industrial and agricultural area will be established in addition to thousands of feddans in Elsalam channel. The port will be constructed on 4,500 feddan (4,669 ac.), and this necessitates 15,000 feddan (15,555 ac.) industrial projects, stores, and free zones. The new port should accommodate and serve all these developments. 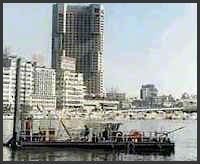 This is one of the highest priority national projects that serve the Egyptian national economy as follows:
• The attraction of container commerce in the Mediterranean which amounts to $6M/yr increasing 8.0% yearly.
• Serving the adjacent industrial and free commercial zones.
• All feasibility studies included that this port will attract about 3.0 M TEU’s in stages till the year 2010.

The first stage will involve building quays with a total length of 2,150 m and dredging a dock to a depth of 17m. The terminal will have a capacity of 1.5M, 20-ft equivalent units (TEU’s) a year in its first phase. Rising to 3.0M TEU’s a year in the second phase.

North Alsukhna Port
The dredging is estimated at about 40M m3. Concerning North Suez Gulf, this new port will serve a large area of industrial factories so development is essential and communication with other zones is important. North Suez Gulf is worthy to benefit from its position and situation and should be capable of widening and communications.

The Government of the Arab Republic of Egypt has initiated the development, design, and construction of a new port in the North of Alsukhna in the Gulf of Suez to meet the expected demand for marine transportation.

Phase one of the project will include the construction of one 750 m-length basin (with two quay walls), an access channel, turning circle, and breakwaters. The area allocated for phase one is north of the project area with approximately 5-km length from Suez. Alsukhna main road to the Gulf coast and width of about 2km, along the southern border of Sky Hawk Touristic Village.

Arab Contractors, the Middle East’s largest construction firm, conducts over US$1.5B worth of construction work annually. It has been active in dredging for over 30 years and uses Ellicott® brand dredges exclusively.

The new Series 1870 “Dragon®” dredge will be built at Arab Contractors’ shipyard in Ismailia using Ellicott® brand designs and machinery. Power will come from Caterpillar engines supplied by CAT’s Egypt dealer, Mantrac. With over 1755 hp (1.309kw), the Ellicott® dredge will be able to pump sand from a depth of 50ft (15.2m). The dredge is worth more than a million dollars.

The dredge will be used to supply material for the new international ring road serving Port Said City, and for land reclamation in the same area. Arab Contractors has a $10M contract with the Egyptian government which requires the use of several of the Ellicott®  brand dredges in its fleet. These units works will serve several projects being highlighted by an investor conference in Cairo sponsored by the U.S. Trade and Development Agency.

Arab Contractors Co. has been involved in the following projects:
– River Nile Navigation at Luxer, under the Ministry of Irrigation. Estimated at 6.0 million m3 of dredging, cleaning, and ditching to level –4 for the river navigation course.
– Oyoan Mousa Electricity Station, Ministry of Electricity 3.3 million m3 of dredging, including excavation for inlet and outlet channel for a power station in sand and some rock.
– Port Said Ring-Road Second Stage, Port Said Governorate. Dredging Manzalah Lake to complete the construction of a new highway from Ras el Ash to Doneletta City.