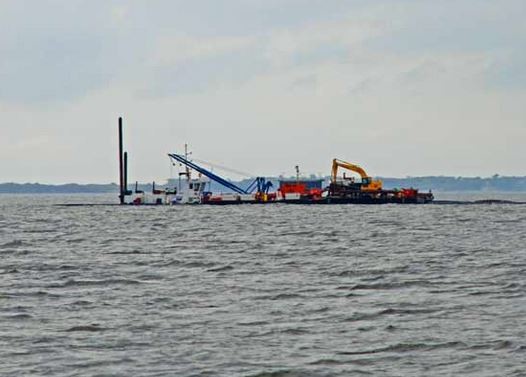 H&L Contracting resumed dredging operations at Watch Hill on Fire Island this week, according to the National Park Service.

The dredge being used for this project is an Ellicott 1170 Dragon® dredge. The project, aimed at maintaining safe, public access to marina and docking facilities impacted by Hurricane Sandy, was stalled in early January due to severe winter weather and extensive ice in the Great South Bay.

Dredging efforts will be focused on restoring the Watch Hill navigation channel and will be ongoing through March 31. Due to weather delays, portions of the project can no longer be completed during the dredging window and may be completed from October, 2015 to January, 2016.

The dredging project began in December, 2014 and was halted January 8, 2015 as a result of icing in the Great South Bay.

The $2.9 million project, funded through Hurricane Sandy relief aid, was designed to restore Sailors Haven and Watch Hill navigation channels to a width of 100 feet and depth of six feet at mean low tide.