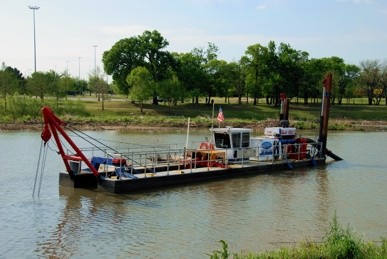 Even as drought lingers and intensifies across the region, the North Texas Municipal Water District will begin dredging two areas of its key reservoir in the next few months, allowing the utility to increase water deliveries by up to 7.2 million gallons a day. An Ellicott 370 Dragon dredge is being used for this project.

The $1.9 million project will remove about 10 feet of accumulated silt around two of the three water intake pipes at Lavon Lake, district spokeswoman Denise Hickey said.

The current water level at Lavon is about 480 feet above sea level. But during the heat of summer, the level can fall 5 to 10 feet through increased usage and evaporation. If the lake level falls to 469 feet, Raw Water Pump 3 would no longer be able to pump water from the lake, Hickey said; at 470 feet, Raw Water Pump 2 would be in the same situation.

“Those are the critical elevations,” she said.

The only remedy then would be bringing in submersible pumps and placing them in the deepest parts of the lake to keep water flowing to the district’s 1.6 million customers, Hickey said.

“You’ll still get water,” she said, “but it isn’t the preferable way.”

The water district approved the dredging project this month and directed the contractor to begin work within 60 days, she said, and Dredge America intends to start as soon as it can.

“They have to do all the staging, getting everything ready,” Hickey said. “My understanding is there are very few pieces of dredging equipment available. And the lake level has to be low enough for them to work. If we get too much rain [in early spring], it makes it difficult to work.”

At this point, Dredge America plans to begin work the week of March 9, Hickey said, and the dredge should be on site by the end of February.

The district is doing similar work at a second reservoir, a $1.8 million project at Jim Chapman Lake, which supplies both the North Texas Municipal Water District and the city of Irving with water.

“Chapman should be finished sometime around the end of summer,” Hickey said.

When the district calculated some numbers during drought conditions in 2005-2007, dredging to even modestly increase the lake’s capacity would have produced enough dredge spoils “to cover all of Rockwall County in 3 feet of sediment,” Hickey said.

“And the cost would have been 20 times higher than using any of our other sources of water.”