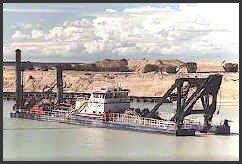 PROJECT INFORMATION: After a thorough tour of worldwide dredge manufacturers and existing dredge equipment, the Cooljarloo Joint Venture awarded Ellicott a turnkey project to design and build their dredge, “COOLJARLOO I”, for heavy minerals mining in Western Australia. The dual wheel excavator dredge, which began work in December 1989, was described as the world’s largest mineral sand mining dredge and the largest dredge of any kind in Australia.

The decision was based on price and delivery. Ellicott proved to have the best product, lowest price, and 11 month delivery. In fact, the dredge was completed in less than eleven months from project start-up, “record time for a project of this size and complexity”, according to joint venture partner Minproc.

Early delivery of the “COOLJARLOO I” was made possible by Ellicott’s philosophy of “single responsibility” project management. The design and construction of the dredge’s machinery was completed in the United States, the structural steel work in Singapore, and the automation in the Netherlands. All of the components were shipped to Australia for field assembly at the site.

The “COOLJARLOO I” has the first electric line shaft driven dual wheel excavator. The entire dredge is DC electric with the exception of the spuds which are handled by hydraulic cylinders. The 900 HP patented dual wheel excavator has a 160″ diameter and approximate weight of 100 metric tons. This electrically driven rotating dual wheel excavator has roller bearing supported shafts, fabricated steel gear housing and receiving hopper, suction pipe, and structural supports for attaching the module to the dredge ladder.