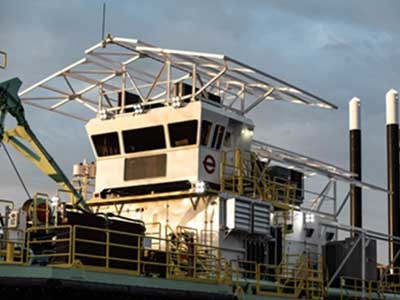 In 2017, a petrochemical customer approached Ellicott Dredges about building a customized electric Bucketwheel dredge. The customized dredge had to be designed to withstand desert-like conditions.  The customer chose Ellicott Dredges based upon Ellicott’s experience and reputation for designing and building dredges to work in difficult and challenging environments.

Discovering the Solution to a Challenging Problem

The most significant challenge facing the team from Ellicott was the ability to transport a 1MM lb. (453,592.3 kg) dredge halfway around the world. During the beginning stages of the project, a team from Ellicott’s Major Projects division sprang into action and discovered a solution to the problem. Thanks to some creative thinking, they decided to design and build a dredge that was capable of being disassembled, easily transported over road and sea, and reassembled at the customer’s project site.

What Makes This Customized Dredge Different?

The dredge will spend most of its time in a salt pond pumping salt and brine. It’s important to realize that the first few feet of water consists mostly of sand. This part of the process is easy to manage. However, beneath the sand is a deposit of halite mineral that contains nearly 90% pure salt. In fact, the mineral is hard and requires increased power from a dredge that comes with a dual wheel excavator. This makes it possible to continue pumping salt and brine.

Due to the nature of work that’s involved the equipment onboard the dredge is suitable for a highly corrosive environment. Optional items installed on the dredge include:

Final Stages of the Project

After spending several months assembling the customized electric Bucketwheel dredge and undergoing testing, the team from Ellicott Dredges is proud to announce that the final stages of construction are now complete.

In May, a crew from Ellicott Dredges completed disassembly of the dredge. Various dredge sections and components were shipped breakbulk and crated in containers and then placed on a vessel that set sail for delivery from the Port of Baltimore. In addition, Ellicott’s team of experienced field service engineers will be available on site to assist the customer with the assembly of the dredge and training of their crew.