COMSTOCK TOWNSHIP, MI — This is the last summer the Kalamazoo River will be the scene of heavy dredging activity, as Enbridge Inc. cleans up the mess from a pipeline leak that sent an estimated 800,000 gallons of crude oil into Talmadge Creek and the river. 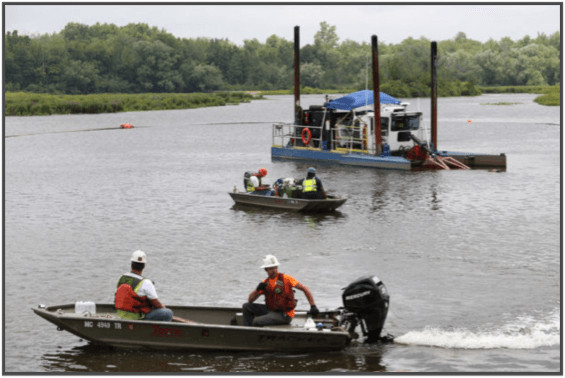 Nearly four years later since the spill was discovered July 26, 2010 near Marshall, the Canadian pipeline company is wrapping up the cleanup.

Comstock Township Supervisor Ann Nieuwenhuis said the work in her eastern Kalamazoo County township has carried on pretty much out of public view and apparently without a hitch.

“Every two weeks the (U.S. Environmental Protection Agency) coordinates a stakeholder meeting in Marshall that I attend in person or over the phone,” Nieuwenhuis said. “Two weeks ago I asked to go to the site. My sense is we have the Cadillac version (of dredging operations). The subcontractor put a lot of thought into how to set it up,” she said, resulting in a quiet, efficient, safe operation.

“They are on target on the timeline we set for them, and I have confidence the land will be put back in the condition it was (before the spill) by the end of November, which was the contractual agreement,” Nieuwenhuis said.

Enbridge spokesman Jason Manshum said that when removal of contaminated soil from the Morrow Lake delta is complete, which is expected to be mid- to late-summer, the work as outlined under a March 2013 order by the EPA will be complete. Riverbank restoration will continue through the fall along the entire 35-mile stretch of waterway in Calhoun and Kalamazoo counties that was subject to the spill clean-up, he said.

Since the release of heavy crude oil from Enbridge’s pipeline system, the state and federal governments have partnered to oversee containment and removal of oil from the surrounding environment.

Then, aside from periodic environmental monitoring, Enbridge’s work will be finished, Manshum said. “If there is ever a need to address a particular area (we’ll be back), but as far as we know, we are in the final stages.”

The company had originally hoped to be done with the dredging work on Morrow Lake by the end of 2013, but had trouble finding an acceptable site for a dredge pad to temporarily hold the material before it is trucked away. In February, Enbridge received approval from the Comstock Township Planning Commission to place a dredge pad at Benteler Industries, which sits to the north of the lake on East Michigan Avenue.

That approval was contingent on Enbridge using a truck route that avoided the intersection at Michigan Avenue and King Highway, as up to 200 trucks per day transport contaminated sediment from the site to an approved landfill. Another condition was that Enbridge set up air quality control monitors in the nearby Fleetwood Neighborhood.

Since the dredging work began, Nieuwenhuis said, “only two times have we had calls — on April 22 some people complained about a diesel smell. A lot of trucks were in and out because that was the first day weight limit restrictions were lifted.”

One other time a person called complaining of a smell, she said.

The work being done this summer is out of sight of the Fleetwood neighborhood, hidden by an earthen berm, and air and noise are monitored to assure nothing intrudes onto the Wenke softball complex at River Oaks Park.

Trucks have demonstrated strict adherence to their approved routes, Nieuwenhuis said. “So far, so good,” she said.

Upstream and closer to the site of the pipeline break, where dredging and other cleanup work began, the state is heavily involved in overseeing restoration of the river, said Michelle DeLong, Enbridge Response Unit Chief for the MDEQ Water Resources Division. That entails tapering the sides of the channel, installing logs with root structure attached to create fish habitat, constructing riffle pools with shallow rocky areas and installing brush along the riverbank. Planting will be done in late summer and fall.

In addition, state officials “are still monitoring and will be working with Enbridge as the EPA leaves the site when dredging is done,” DeLong said.

“At some point, when the U.S. EPA leaves the project, we will begin our long-term monitoring and assessment program with the Michigan Department of Environmental Quality,” she said.

Steve Hamilton, president of the Kalamazoo River Watershed Council, said his sense from attending regular stakelholder meetings and touring the Morrow Lake dredging operation a few weeks ago is that the final dredging is going very well.

“Enbridge and their contractors, as well as the EPA and DEQ, have learned a lot from prior experience dredging elsewhere in the river system, and they have developed a very well-designed system for the local conditions,” he said. “And it seems clear to me that they have spared no expense to handle the material properly and safely, and ensure that air emissions are not a problem. So, no complaints from my perspective.”