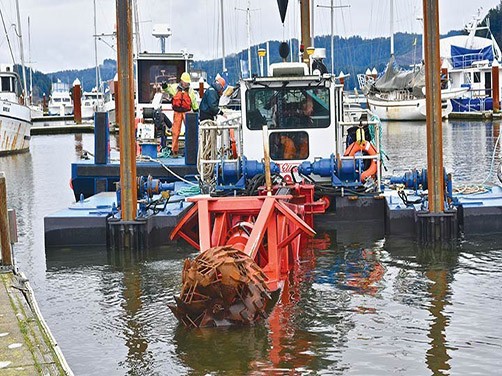 January 16, 2020 – Crews representing the Oregon International Port of Coos Bay are onsite awaiting permission to begin dredging the Siuslaw River marina. The Siuslaw marina, operated by the Port of Siuslaw, contains several tons of sediment, mud, and silt that have compiled over ten years, making it challenging for vessels to navigate a five-mile span connecting the Siuslaw River to the Pacific Ocean.

The Port of Siuslaw is a publicly charted special district that depends heavily on tourist attractions, such as sport and commercial marinas, a boat launch, an industrial park, and an RV campground for economic development. However, due to the inability to safely navigate local waterways and a decrease in the number of short and long-term boat slip rentals at the Siuslaw River marina, casual watermen and commercial boat operators have been forced to take their business elsewhere. 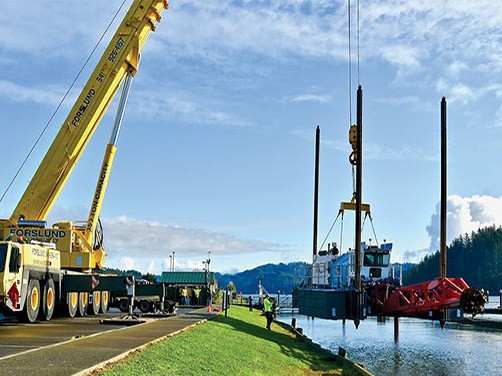 The crew will be using an Ellicott Series 360SL Swinging Dragon® dredge, owned by the state of Oregon, to complete the restoration project. In most cases, the U.S. Army Corps of Engineers would typically handle the responsibility of annual maintenance dredging of navigation channels; however, coverage does not extend to launch ramps and marinas. Until recently, smaller ports have not been able to afford the cost to dredge their marinas, which has led to enormous amounts of shoaling within marinas along the entire Oregon coast. The result of this shoaling threatens the ability of commercial and recreational fishing fleets to moor, yielding catastrophic economic impacts.

Final preparations for dredging near the marina area have proven to be challenging as crews fight rapidly changing weather conditions, shifting tides, and years of ocean and river debris that have settled at or near surface level. As preparations draw to a close, Siuslaw Port Manager Dave Huntington believes that things have progressed quite nicely and that dredging will commence any day now. 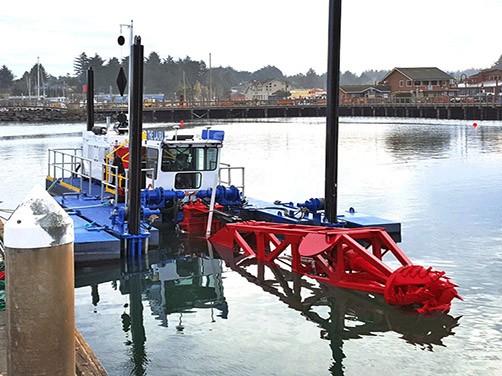 “Right now, they are laying pipes from the area where they will be dredging to the back part of the port where we will be pumping the mud and dirt. They brought a small crew from Coos Bay, and with this weather it’s taken a little longer than we thought to get everything ready to dredge. Yesterday, we moved the dredge to the dock by Novelli’s and the pipes should be in place by the end of the day, which means we are close to starting to remove the mud from the area.”

The Ellicott® swinging ladder dredge possesses a single diesel engine that is powered by an independent hydro-static pump drive and a second pump for auxiliary controls. The Series 360SL Swinging Dragon® dredge is ideal for marina and restoration dredging applications.

For additional information about our complete line of cutter suction and swinging ladder dredges, contact us at sales@dredge.com or complete our project form, and someone will contact you shortly.