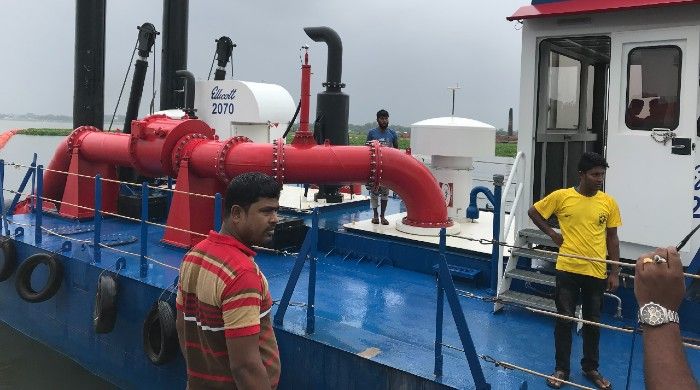 Dredging projects have added an additional 2,300 kilometers of navigational waterways to Bangladesh’s river system over the past several years.

In 2012, following a renewed Bangladesh government dredging initiative, Ellicott began supplying dredges to the Bangladesh Inland Waterway Transport Authority (BIWTA) and the Bangladesh Water Development Board (BWDB).  In the past decade, these two governmental organizations have purchased 32 dredges, over half of which are Ellicott dredges. This includes a mix of the Series 1270 18-inch Dragon®, Series 1870 20-inch Dragon®, and the Series 3870 26-inch Super Dragon™ dredgers.  The first Ellicott® brand dredge was supplied to the Bangladesh government, known as East Pakistan at the time, in 1963.

Considered the least expensive manner for transporting cargo and people, waterways are vital for Bangladesh, which is encompassed by the largest tide-dominated river delta in the world. Nearly 30% of the country sits less than 2 meters above sea level, and as sea levels rise, sedimentation fills the waterways, leading to clogging and flooding.

Due to that lack of maintenance, construction, and natural sedimentation, waterway navigation in Bangladesh can be difficult. With the assistance of Ellicott Dredges, Bangladesh now has 5,900km of accessible waterways during the dry season, up from only 3,865km in 2005.

Understanding of the benefits of dredging, the Prime Minister has allocated significant capital to protect the unique situation of Bangladesh. She highlighted that the country currently needs 500 dredges for navigation, land reclamation, and flood control.

The government’s Delta Plan 2100 furthers this dredging agenda and secures the future of water resources and aims to mitigate the effects of climate change and natural disasters. Approved in September of 2018, it is a long-term plan incorporating the changes and intervention needed to make the Bangladesh Delta safe, prosperous, and climate resilient by 2100.