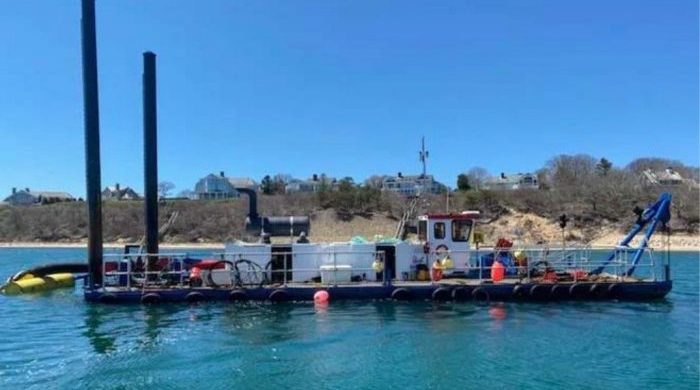 For a quarter of a century, the program has kept waterways to and from the bay easy to navigate for fishing vessels, with 95% of dredged material helping to restore beaches around the peninsula.

“Chatham’s fishing fleet is an integral component to the town’s economy and to the entire state,” said Ted Keon, the town of Chatham’s coastal resources director. “Supporting dredging projects has significant economic return.”

When the program was launched 25 years ago, the first job for the Codfish – the county’s original public dredge – was in Truro. The Codfish returns nearly every year to keep the channel open. In addition to the Codfish, which is now used as a booster, the county owns the Sand Shifter and the Codfish II, which was purchased in 2019.

A study by the Massachusetts Division of Marine Fisheries, the Fishermen’s Alliance, and UMass Boston’s Urban Harbors Institute, has shown that dredging is the top concern in nearly every port in the state.

“The work of the county dredge is as essential as maintaining our roads and highways,” said Seth Rolbein, who led the port profile effort for the Fishermen’s Alliance. “The Cape’s economic health hinges on having reliable ways to the sea.”