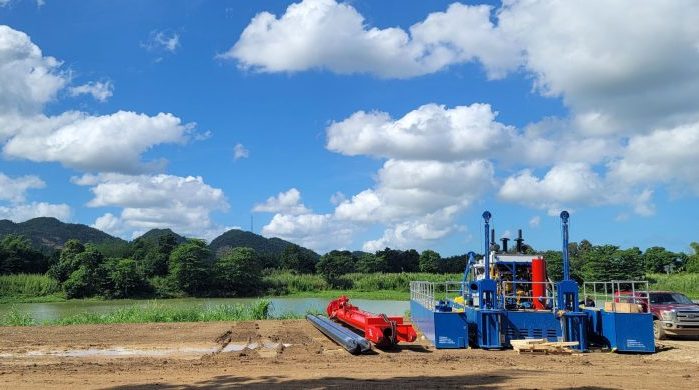 In the dredging industry where applications can range from mining of sand/gravel, to use in ports, harbors, waterways, and even for coastal restoration, we find a very interesting case where dredging has contributed to the supply of clean water to the regions of Puerto Rico. Puerto Rico has faced the wrath of several hurricanes over the past decades and particularly from Hurricane Maria, which has contributed to the increased amounts of sediment in one of the most important reservoirs in Puerto Rico.

This reservoir is the source of the water supply to various regions all around the country. As mentioned, over the last several decades, the several hurricane occurrences have driven a rise in the building of sediment in this reservoir in Arecibo. As a result, the reservoir has lost 70% percent of its water capacity. This is bad news for the nearby regions as this drastically decreases the amount of water that can be filtered.

This is where the Ellicott Dredge came into play. In late 2021, the Ellicott® 670 Dredge was shipped to Puerto Rico where a local company, began executing the removal of the sediment in the reservoir of Arecibo. per contract with the (Puerto Rico Aqueduct and Sewer Authority), a government entity responsible for managing distribution of water and sewage maintenance. Up to this point, a total of 70,000 m3 has been removed from the reservoir. According to the local supplier, the plan is to restore the capacity of the reservoir to 100% by the end of this project. It is important to note that Ellicott’s powerful and reliable 670 dredge with 800 HP and up to 42 ft digging depth is well equipped for a project such as this one.

In a commercial driven world where dredging projects result in a profitable ending, we find in this case that one of the drivers here is not profit but restoring a need for the surrounding regions of Arecibo. With the help of the robust and durable Ellicott® 670 dredge, there seems to be no problem in

finalizing the removal of most if not all the sediment in the reservoir in the next few years. Once the sediment has been removed, the immediate plan will be recouping the capacity of the reservoir in order to continue maintaining the supply of drinking water. The project will be lengthy, but the result will truly be rewarding experience for everyone involved.