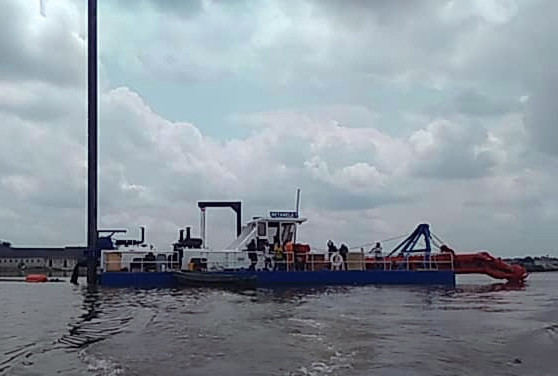 Ellicott Dredges, the Baltimore-based dredge manufacturer with over 133 years of experience, recently built a Series 1270 “Dragon®” dredge for an oil company in West Africa. The dredge recently launched and will be used for channel dredging in swamp regions. The customer has worked with our team before and owns two Series 670 “Dragon®” dredges and appreciates the simplicity of the dredges operating systems, rugged design and high performance.

Ellicott was awarded the contract based on the customers’ interest in the 1270’s shallow dredging optimization feature that is built into Ellicott’s 16 – 20 inch dredges, with an option to adjust the dredges ladder to a maximum digging depth of 50 ft (15.2 m). This is feature is extremely appealing to the customer because there are times when they will have to transition to a land reclamation project that requires efficient work productivity in both shallow and deep working conditions.